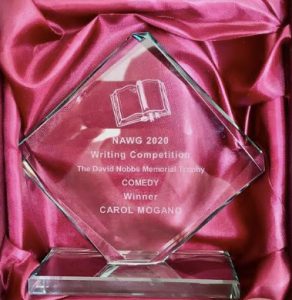 This year Hinckley Scribblers received national recognition at the National Association of Writers and Groups’ Awards 2020, which were announced on 5th September, coming away with 5 runners up and an overall winner.

At the virtual awards ceremony, founder member and secretary of the group Carol Mogano won the overall award for her story ‘Speaking the Lingo’ in the Comedy section, in competition with writers from across the country.
Carol said, “I can’t believe I’ve won.  The group inspires me every week and it’s thanks to all of the Scribblers for their advice and support, which helps me so much.”

Runners-up at the 2020 awards were Brent Kelly in the Open Poetry section, Bob Crockett in the Formal Poetry section, John Welford in the Travel section, Daisy Heggie in the Children’s section (sponsored by Kristen Stone) and the group’s recent book ‘Imagining Age’ in the Group Anthology section.

Chair Bob Crockett said, “Congratulations to Carol who has been the heart and soul of Hinckley Scribblers since its formation. I’m delighted that the group have had such success at the national awards.  I’ve always said we’re a talented group and having this national recognition proves it.  We will look forward to entering again next year.”

In addition to our current publication, Imagining Age we have published several anthologies.  In 2016 we released an audio anthology, with members reading their own work.

This is now available, free of charge.  Click the button to listen to the dulcet tones of Hinckley Scribblers!

Congrats to Bob Crockett who had a 100-word flash fiction piece called ” The Old Storyteller” included in the ” Write Time Anthology- One” which was published in November 2019.

The anthology is available at £8.50 from